When I first installed the ikelite 8" dome port, I was concerned about the additional buoyancy it would add to my rig.  At the time, I was in the process of determining how many Stix floats I would need on my strobe arms to get close to neutral.  I was a little surprised when I put the rig in the test bucket and it was floating face up.  I tried to hold it horizontal like one would when taking a picture and I noticed that it took considerable force to hold it truly horizontal.  I did some online research and noticed that others had also identified this situation.

My first thought was to add some weight to the bottom of the port so I set out to determine the best way to do that.  I remembered that a few years ago when I had mag wheels on a car, there was a item called tape-on-weights installed on the inside of the mag wheels to balance them.  Well, it was off to the automotive store to see if they were still available and, yes, they are.  I figured the weights could work since they attach with weatherproof adhesive foam tape and would stay on a wheel through rain, mud and snow.  They are available in various weights and come in strips.  The ones I found were 1/4 oz each.

My first installation was three rows of trim weights on the inside of the dome port shade cover at the bottom, but this didn't work so well.  I was getting reflections in the super-wide-angle lens and found that three rows, about 36 weights or 9oz, was not quite enough weight.  The handling characteristics had definitely improved.  Removing the weights is a bit tedious as the foam tape tends to separate before the adhesive releases.  Because the weights can not be repositioned, it was back to the store to get more weights; oh the joy of problem solving! I put the new weights to the outside of the lower part of the dome port shade and added a few more.  I now have a total of 11 1/2 oz of trim weight on the dome port shade.

When placing the trim weights on the shade, I left plenty of room around the set screw.

I have since learned that ikelite made at least two different backings for the 8" dome port.  The one shown here that is made out of a plastic material similar to delrin.  The other dome that looks similar but has different flotation characteristic's made out of aluminum.  Of course the idea will work for either dome port but you will need significantly fewer weights on the aluminum backed dome port.

The weights should be available at most automotive supply stores like Pep-Boys, AutoZone, NAPA, etc.  Here is a link to the wheel weights. 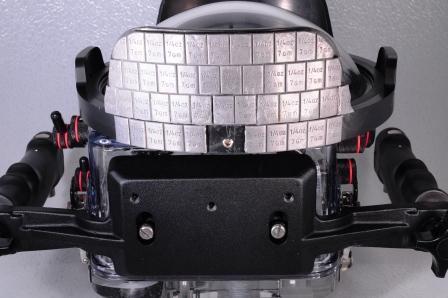 Send an e-mail to